Did I mention that Janet is a waller? A dry stone waller that is?

Building dry stone walls dates from the Middle Ages when we (i.e. all of us) developed from hunter/gatherers into farmers and, along the way, we invented this foolproof method of dividing the land up into parcels.
When I published our last blog post I knew this, but I got a few of my facts wrong.
Janet has in fact been building dry stone walls in Derbyshire for about 50 years – not 20 as I incorrectly noted. And when I say ‘all of us developed into farmers, I actually mean country-dwellers like Janet who think nothing of humping great lumps of granite from one side of a field to the other. Sadly, soft urbanites like me are really only comfortable lifting a coffee cup from one side of the table to the other.
So, to set the record straight, I would like to reproduce mine and Janet’s recent ‘Dry Stone Wall Conversation’, along with a couple of cracking photos of the interesting artifacts Janet found buried amongst the stones of some of the walls she rebuilt recently; from an original mineral water bottle from Matlock in Derbyshire to a Camp Coffee bottle, both dating from the 1880s.
So Janet, why do we have dry stone walls and what purpose do they serve?
The oldest walls I’m aware of were built in the Middle Ages and were called ‘Clearance Walls’. As we developed from hunter gatherers into farmers we cleared the land of random rocks and stones and used them to create boundaries around the land we owned. The walls are still important today as they literally teem with wildlife: insects, newts, toads, birds, even snakes, all make their home in these walls. And don’t get me started on the snails; there are literally thousands of them in the wall I’m rebuilding at the moment. 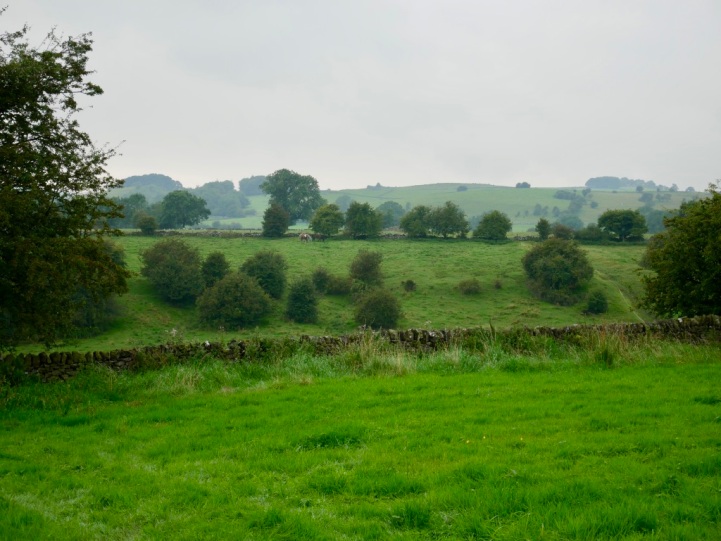 Tell us a bit more about this particular wall
Because of the types of stone and the style its been built in, I’d say it is at least 500 years old, possibly a lot older. Unfortunately  when I came on the scene, most of it was in a sorry state.  As you can see, I’ve separated all the stones into piles: foundation stones, facing stones, packing stones and coping stones. A bit like you’d sort pieces of a jigsaw.

Do you find anything interesting when you’re dismantling these ancient walls?
All sorts! I was building a wall in Parwich two years ago, part of an old reservoir, and I found lots of bottles, including the Camp Coffee bottle mentioned previously, plus a clay pipe and a partly disintegrated pair of children’s – or women’s –  clogs. The clogs, which were made of leather with steel rims, were common to this part of the world (Derbyshire) from the 1840s to the 1920s. The tradition was for people to hide a pair of clogs behind the chimney or in the walls of the house as it was said to bring good luck. Perhaps the idea was to bring luck to the reservoir.
Looking at some of the foundation stones you’ve got here I’d say they were pretty heavy…
Yes, up to 50 kilos in weight, which I can lift and carry but any heavier than that and I have to use an iron bar to lever the stones around.
And what’s next after you’ve sorted the stones?
I lay out the copers (the top stones) in a long line on the ground, then I line up the building stone and the packing stone so I can get a good look at what I’ve got to build the wall with. I then look at my foundations, digging the ground out to make sure it’s level, which might require me to go a foot deep.  I then set up my metal frames and attach a plumb line which will make sure the top and bottoms are stardard throughout the length of the wall.
What size are we talking?
The wall should be two feet wide at the bottom, one metre high and one foot wide at the top.
Is mixing your imperial and metric measurements a Derbyshire Thing?
No, I just can’t get my head around centimetres and millimetres, so I fall back on inches when I need to! 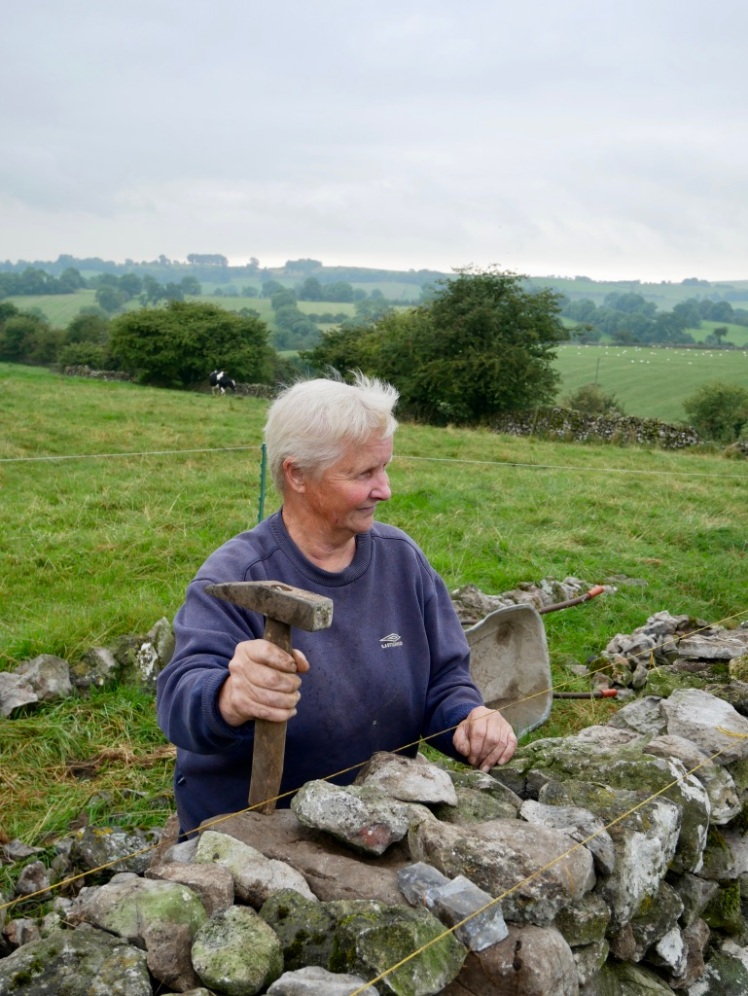 I see (I don’t really…) And then what? Do you just see a space and think: ‘That stone will fit nicely in there’?
I have a formula: ‘One over a two and then a through’. Just as you would with a standard brick wall: you don’t line up the bricks in a straight line but ‘step’ them. This will prevent a crack going up a wall from top to bottom. Of course, there are always exceptions…but as long as you get the ‘batter’ right, you should be ok.
The batter?
The amount of slope from the bottom of the wall to the coping stone at the top. On a standard wall, the degree of batter on each side should be six inches so that each side of the wall ‘leans’ on the other.
And how much wall can you build each day?
If I’m building a wall from scratch in good weather, I’d say two to three metres, although some would claim they build faster. I’d be very sceptical of those wallers who claim four to five metres…
To be honest, I’m sure building one metre of wall would be a stretch for me
All it takes is (years of) practice. (She says with a smile.) I’ll bet I could get you up to speed in no time: I used to teach walling at a local college in Derbyshire. I’m sure I’ve had worse students….

I’m not sure my future lies in building dry stone walls, to be honest. But at the age of 67, Janet, have you got any plans for retirement?
No, none. As you can imagine, most builders have to stop eventually due to problems with their back;  all that bending and lifting. But at just under five feet tall I don’t have far to bend! However, I do sometimes have issues with other parts of my body. As you place one of the larger stones onto a wall, the weight of it means you have to drop it quite heavily and you also have to stand close to the wall. Result: trapped nipples! I have done this a few times and can say – absolutely categorically – the pain is second to none.
Trapped nipples aside, there is an immense sense of satisfaction in walling. There are records of dry stone structures on Orkney dating back 3,500 years; I’d be happy if some of my walls were standing, here in Derbyshire, after half that time.
For more information: www.dswa.org.uk

One thought on “Janet: A Good Build For A Waller”